The key words Generation X, Y and Z as well as employer branding are one of the most discussed subjects of the human resources at the present time.

What does that exactly mean? What are the differences between the generations? How can they influence the working world and the recruiting process? Each generation brings certain general and work-related behaviors, abilities, value systems and needs into the workplace. These can be expressed in a variety of ways (compare Oertel, 2014). In the first part of Recruiting Generations, the characteristics and needs of Generation X will be discussed. 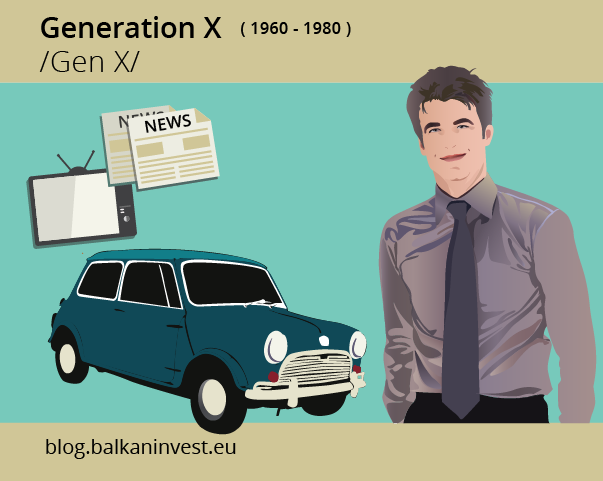 Who is Generation X?

The Generation X, born in 1965 to 1980 provides the majority of the working population of the western society. True to the motto: “working to survive”. They pursue a successful career and a balanced work-life. Employers do not have a significant effort with the employees. They are very consumer-oriented and they are less interested in politics and world affairs.

Other names of this generation are “carefree” or “generation of golf” (for Germany). The general name derives from the novel “Generation X – Stories for a growing culture” by Coupland (1991). They have experienced the end of the “new-economy-bubble” and the chernobyl disaster. As well as rising unemployment and the economization of wide parts of society. Their values are characterized by the pursuit of security, prosperity and career. Early in their careers, they were confronted with various forms of group work, flexible working-time models and the increasing communication and information technologies (compare Eberhardt, 2016).

The followers of this generation were often able to grow up in an economically stable parental home. Therefore, good education played an important role. Generation X is highly educated and partly internationally oriented. They are incredibly determined in their professional live, which leads to a later family foundation. The greatest challenge for them is the arrangement of professional and private life. They are parents of younger children and at the same time in leading positions with partial international responsibility (compare Eberhardt, 2016).

How to approach Generation X?

An advantage of this generation is that on the one hand, they have already collect great deals of experience and on the other hand they sill have few years in the professional world. But how do you speak to them as an employer? First of all, it is very important to be open-minded and communicative with them. They are authentic and educated and also want to be treated like this. A large part of generation X is represented on social media sites and also use them for their job search. Therefore, it is always important to publish jobs also on these sites. These should be creatively, but also informative. In addition, this generation does not like to wait and therefore quickly losses its interest in a company, it does not answer after a few days.

The Generation X represents very experienced and determined workers, who still have a few years to go to the pension. They are looking for a safe workplace with the possibility to continue or even start a successful career.

As part of our new regular series “Employee Motivation as a part of Employer Branding” we would like to illuminate the two best-ranked aspects of the 2015 “work motivation” study by the Manpower Group – a good working relationship with colleagues and superiors as well as flexible working hours.

The most important factor for employee motivation is a good relationship with colleagues and superiors. In the study, 65 percent of the respondents said to be more motivated if they get along well with colleagues and superiors. Even though the percentage is lower than last year (77 percent), a good working relationship is still considered to be the most important motivating factor.

Pierre Bourdieu influence on the theory of social capital

The most famous scientific theory about the positive motivational influence of good relationships between colleagues and superiors is the theory of social capital by the French sociologist and social philosopher Pierre Bourdieu. Social capital describes the collective benefits of social relationships between different people, in the case of a company the relations between employees and superiors.

Building social capital requires a high level of trust for giving support, assistance and recognition to others and to establish cooperation. All these characteristics and a high degree of trust lead to a strong intrinsic motivation of the employees and to higher motivation. An employee who does not feel well, is not a good worker. Real friendships between the employees are not necessary but social capital promotes a pleasant and helpful working environment, which leads to collegial relationships and long-term retentions of employees.

But even though flexible working hours can be found on almost every job advertisement as an incentive, researchers at the University of Minnesota came to the conclusion that flexible working parents have no significant time savings. It means, in particular, that workers can not afford more time for their children. Flexible workers have just more time for themselves and feel less stressed, which is beneficial for their own well-being and their own motivation.

Good relationships with colleagues and supervisors as well as flexible working hours increase the motivation and commitment of employees and affect the long-term retention of employees in a positive way. In addition, happy workers like to share their positive experiences within the company and thus communicate unconsciously a positive corporate image.

In the next part of our series “Employee Motivation as a part of Employer Branding” we will discuss the aspects “friendships with colleagues” and “free drinks for employees”.

The Social Network Facebook has gained a size that cannot be ignored any more. Its well above 1,32 Billion users share more than three million likes – every minute! The following infographic illustrates the most recent numbers that show, how important Facebook has become for social recruiting.

Whereas some recruiter see Facebook as a bit dodgy (in comparison with career networks such as LinkedIn or XING), others have recognized its value, in particular to communicate an employer brand externally and internally. And even for direct recruiting Facebook can offer a lot, in particular if you are familiar with its powerful search functionalities.

As the infographic illustrates currently 15 percent of the 422 HR -professionals that participated in the survey from January 2014 are already exploiting Facebook for career websites. Twelve percent use it occasionally and three percent for special positions only.

Who wants to reach out on Facebook has to use its paid Facebook ads, like it or not. But only six percent of the participants make us of this way to shuffle visitors to their Facebook career website on a regular basis, with eleven percent at least from time to time and another two percent for special positions.

It becomes pretty clear that the use of Facebook in recruiting has a lot of potential in it. Although one has to note that Facebook is no more growing that rapidly in Germany in sheer numbers if at all. But its enormous size is a factor for the internet, and it will be like that for the near future. Innovative recruiters recognize this – and get engaged!