It has been the second time that Balkaninvest took part as an exhibitor at the career fair in the Goethe institute in Sofia. Interesting applicants as well as potential clients visited our stand. Especially German-speaking specialists from Bulgaria took part in the fair which was organized by the Alumniportal Germany.

After a short presentation about the Alumni Germany Website by Ms Maria Endreva, reference person of the Alumniportal in Bulgaria and Mr Enzio Wetzel, head of the Goethe institute, the alumni had the change to do job interviews with the exhibitors.

Our stand was well-attended by well-trained visitors with excellent German-skills. The majority offered a specialist education and many marketing and IT candidates were interested in our job advertisements.

In addition to that some of them were already living in a German-speaking country and wanted to inform themselves about the current employment situation, job and future prospects in Bulgaria.

But also other exhibitors of the fair came at our stand for small talk which offered us the possibility to establish business contacts.

Highlights at the Balkaninvest stall

We presented the job ads we posted on the Alumni Germany platform and received many CVs at our stand. Some candidates already knew our employment ads from the Alumni platform and asked directly about them. Many fair participants knew Balkaninvest already as we took part in this fair for the second time or as they already had an interview at our office.

We offered a lottery as highlight for our visitors. The participants had the chance to win one of three interview trainings worth 149 Leva. The price included the simulation of a typical job interview in our Balkaninvest office in Sofia as well as a CV analysis including a written evaluation.

The candidates had to do a short German fill-in-the-blank test,in the German level stated in their CV, to be allowed to participate. The winners will be informed until the end of next week.

Relaxing conclusion of the fair

Exhibitors and visitors were offered a buffet including water, juices, coffee as well as sweet and salty snacks. At the end of the event the guests were able to conclude the evening with a glass of wine and nice conversations between exhibitors and organizers. The operators were also asking the participants about feedback and improvement suggestions.

Summarizing it can be said that the career fair was a successful and professionally organized event. We were offered the possibility of informative talks and to socialise with important business contacts. We really look forward to take part in the next career fair “Trained in GermanY“. 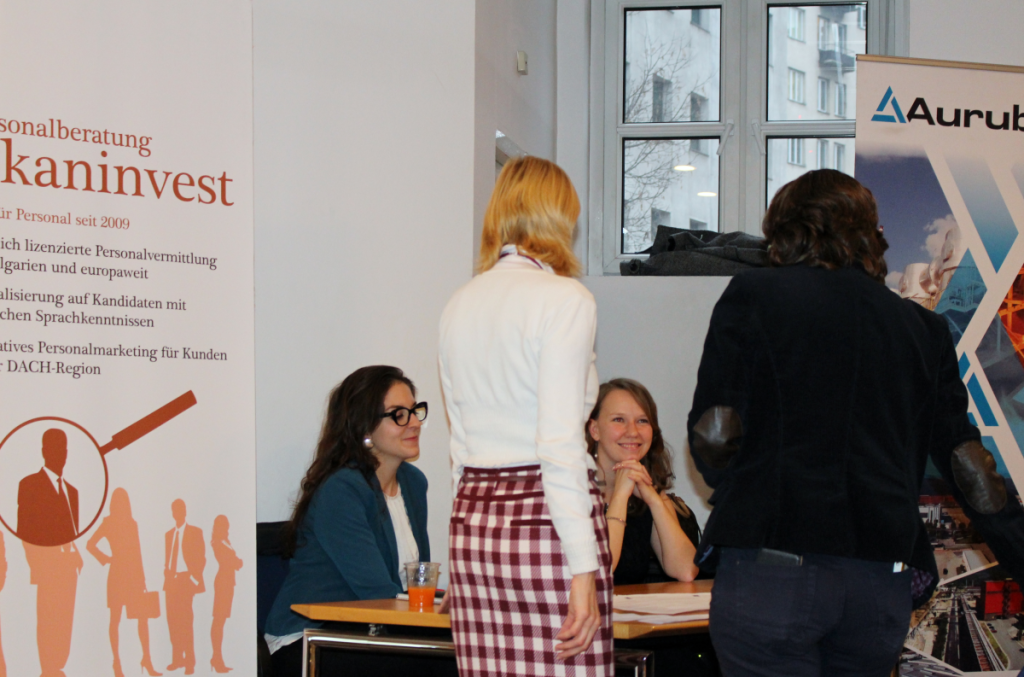